From Windows Wallpaper Wiki
Jump to navigation Jump to search

Bliss, originally known as Bucolic Green Hills, is the default wallpaper of Windows XP, fully bought from Corbis by Microsoft for use as XP's main branding image. It depicts a green hill in Sonoma County, California, USA, just after the rain had went off. It was taken by Charles O'Rear in January 1996 while visiting his girlfriend. O'Rear also took the well-liked but lesser known Red moon desert, along with the wallpaper used in the Blackcomb UI demo. Being the default wallpaper of Windows XP and the subject of many memes, it is easily the most well known Windows wallpaper of all time, and it has been seen by millions of people all over the world. It also appears on a card in cards.dll, where it is cropped to just the clouds.

Photographer Charles O'Rear was visiting his girlfriend Daphne Irwin in January 1996. He stopped by the side of Sonoma Highway (California State Route 12 and 121) to take a few pictures of the hills with his Mamiya RZ67 medium-format camera, including the picture that would become Bliss. During this time the hill appeared to be greener than usual as a storm had just passed and there had been other frequent winter rains. Along with that, the vineyards had been removed from the field due to a phylloxera infection; both factors combined made it the perfect opportunity to take a memorable, dream-like photo. He would submit it to the Westlight stock photo agency (which he co-founded with Craig Aurness, who took the XP Beta sample picture Surfer) under the name of Bucolic Green Hills (with an ID of 71810), along with a vertical variant (ID of 71811). In 1998, Bill Gates-owned Corbis would buy Westlight, incorporating their photos into their evergrowing stock photo library. Corbis scanned best-selling images and added them to the online database,[1] meaning companies have licensed Bliss in the past.

In 2000, Microsoft contacted O'Rear via Corbis about purchasing the photo. With Bliss, Microsoft went a step further than merely licensing it: they bought the full rights to the image meaning no company would ever be able to license the photo from Corbis again, as the image is supposed to represent XP itself. Although Red moon desert, also taken by O'Rear, was allegedly being considered as the default wallpaper, they settled with Bliss due to Red moon desert's apparent resemblance to buttocks. It was purchased for an undisclosed amount of money in the low six figures; O'Rear cannot reveal the exact amount without violating a non disclosure agreement. He did not receive the full cost as Corbis handled the sale. As Microsoft had now become the image's owner, O'Rear had to send them the original film along with paperwork. As the cost was so high, delivery services refused to send it, so Microsoft had to buy O'Rear a flight to their offices, where he delivered the film in person. Several Microsoft employees asked him for 10x8" prints of Bliss. Despite this, the version used in XP is identical to the version that was for sale on Corbis.

In 2019, it was discovered that the Corbis Westlight Creative Freedom CD-ROM contains a low res and heavily compressed thumbnail of not only Bliss, but also a vertical version of Bliss. After it was shared on Reddit's r/windowsxp subreddit, a Redditor asked O'Rear if he could make the vertical version available in high res, due to the thumbnail being low res and heavily compressed. O'Rear responded, explaining that Microsoft also owns the rights to it, and although he wishes he could share it, doing so would violate the agreement between him and Microsoft.[2] This would explain why it is no longer available on stock photo agencies either. 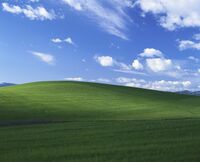 An uncropped version of Bliss (scan likely from 2016), featuring clouds, hills and grass not present in the Corbis/XP version.

For many years, the location of Bliss was unknown to the general public. There was a wide range of guesses as to where it was taken, including France, England, Switzerland, the North Otago region of New Zealand, southeastern Washington, Ireland, and the Alentejo region of Portugal; the latter two are a result of Dutch XP naming it "Ireland" and Portuguese XP naming it "Alentejo" respectively. Many users also speculated it was not even a real photo at all.

The photo is virtually unedited contrary to popular belief, as many people believe that it was a digital composite image of a hill combined with a separate sky photo. Microsoft are often believed to have cropped the hill and added extra saturation, however the former was done by Corbis when they digitized best-selling Westlight images while the image was already saturated to begin with due to O'Rear using the Velvia film. The original 4510x3627 TIF from Corbis has also surfaced as it was available from Fujifilm's site. It is likely the exact same copy that Microsoft purchased from Corbis, as it contains Corbis metadata and uses the Corbis RGB format (which has a rather problematic color space, resulting in some programs making it look brighter than it actually is).

Due to it being the default wallpaper of XP, along with the image used to market the operating system, Bliss has become iconic. It is regarded as one of the most viewed photos of all time, as a result of XP's success and many people not bothering to change the wallpaper. David Clark of British magazine commented on Bliss that "it's attractive, easy on the eye and doesn't detract from other items that might be on the screen are all contributing factors." He believes it was chosen as "it's an unusually inviting image of a verdant landscape and one that promotes a sense of wellbeing in desk-bound computer users."[3] In an interview with O'Rear in 2010, regarding Bliss, he stated: "I didn’t ‘create’ this. I just happened to be there at the right moment and documented it. If you are Ansel Adams and you take a particular picture of Half Dome and want the light a certain way, you manipulate the light. He was famous for going into the dark room and burning and dodging. Well, this is none of that." He also believes it will be mentioned in his obituary.[4]

As the default wallpaper of Windows XP, Bliss has become iconic in online culture. Several meme edits of Bliss have been made, along with tribute photos inspired by the original. It also has the most detailed backstory out of Windows wallpapers as a whole, as a result of both its popularity and the circumstances that led to it being shot to begin with.

Bliss also holds a special place in O'Rear's heart, as not only is it his most successful image, it was also taken when visiting his girlfriend. When O'Rear gave Microsoft his phone number, he hoped that they would call him to take a photo for Windows 8. This did not happen, and it is unlikely Microsoft will ever do so for later versions of Windows. With Windows 10, Microsoft hired photographers Steve McCurry and Chad Copeland instead. 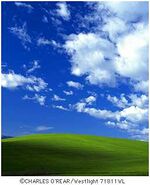 The shot of Bliss that appears in XP is not the only shot O'Rear took while at the hill. There are at least three alternate shots of Bliss taken by O'Rear himself around the same time, one of which was also sold as a stock photo by Westlight and Corbis, while the other two are exclusive to O'Rear's PhotoShelter and were never available from Westlight, Corbis, or Getty Images.

There are also versions of Bliss that are less cropped than the Corbis version, showing more of the small hill on the left.

Over the years, Microsoft have created several edited versions of Bliss. Shortly after XP's release, they released a screensaver version of Bliss with different, animated clouds. Only the top of the hill is present, as the rest has been cropped off. Windows Mobile 2003's default wallpaper is also a heavily cropped version featuring new clouds and a Windows flag in the bottom right. Windows Mobile 2003 SE also includes a theme titled Bliss, which includes a lower res, more cropped version of Bliss with an added Windows flag; unlike Mobile 2003's default wallpaper, no edits to the hill and sky have been made save for it becoming brighter.

The downloadable Christmas Theme 2003 also contains two wallpapers titled Snowman and Xmas Tree, both of which feature a cropped, snowy version of Bliss with a snowman and a Christmas tree on them respectively. Similarly, in 2020 Microsoft shared a tweet showing four brightened versions of Bliss with a snow overlay added to them. A white cutout is also added on top of the hill, and progressively gets less transparent in each image.[5] 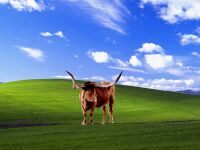 A version appears in Longhorn build 5001.

A version of Bliss with a Texas Longhorn bull humorously added to the center of the image appears in Longhorn build 5001. It appears that the bull photo was taken off a random photo on the internet. As very few 50xx builds have been leaked, it is unknown how long this version of Bliss was used for, though it was most likely used until around 501x. There was also uncertainty about whether the wallpaper or even the screenshots of the build itself are real, however in 2020 build 5001 finally leaked, confirming its authenticity.

A version of Bliss also appears in Windows XP Media Center Edition 2005, under the name of Energy Bliss. It is based on the original, but with a noticeably different sky and clouds, and several light effects have been added, giving it a more modern, digital look. It has also been cropped to only include the top of the hill, like with the screensaver version. It is at 1600x1200, compared to 800x600 used by XP's wallpapers.

Microsoft New Zealand's downloadable Royale theme, rather than using Energy Bliss, uses a wallpaper titled New Bliss. It is unknown where exactly it originates, although it appears to be heavily edited and it could possibly have came from a stock photo. This wallpaper has been falsely spread around as a Longhorn wallpaper titled Aero Bliss. They also released a New Zealand parody of the Bliss wallpaper with several sheep present, along with an unrelated wallpaper titled Bluff.

Simon Goldin of the Swedish photographic duo Goldin+Senneby would take a picture of the hill in November 2006 titled "After Microsoft", showing that the view is now covered in grapevines again,[6] as the phylloxera infection that led to them being removed was several years ago at this point.

Over the years, various people have visited the location and took photos of the hill now, as a result of Bliss' popularity. The hill remains covered in grapevines to this day, as they were only temporarily removed due to an infection. One example of these photos is one by James Smith on Alamy, taken in October 2016.

Names in other languages[edit | edit source]

This section is incomplete. If you have any other translations, please add them.

Retrieved from "https://windowswallpaper.miraheze.org/w/index.php?title=Bliss&oldid=4110"
Categories:
Cookies help us deliver our services. By using our services, you agree to our use of cookies.